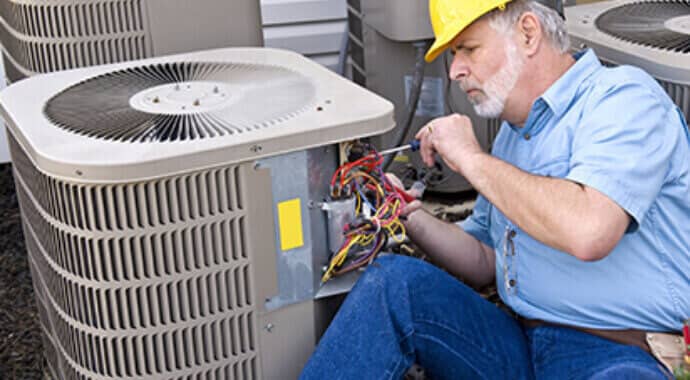 A lot of times when the capacitor goes bad, it’ll bulge out on the top. Sometimes it’s rare but sometimes the whole top will actually pop off.

You’ll have that dielectric grease all over your electrical section there are two, but there are other times when the capacitor looks good, yet still dead and the only way to check that is to use a meter, or you can just blindly replace it because that is the most common fix and capacitors do just die with time.

It’s normal, but what speeds up their death is a very dirty condenser coil, you should clean that frequently or if you have a dirty inside filter. A lot of times it’s kind of might to be a coincidence but it seems like when the capacitors dead and we go inside and check the filter.

A lot of times that furnace filter will be really dirty as well. Also after a big thunderstorm, Seems like it takes out a lot of capacitors to like the next day or two, we have a bunch of capacitor calls to replace it.

So we’ll come to a house, and either the control board is not sending power to the outside unit.

When the thermostat is calling for cooling, or sometimes it’ll be doing wacky stuff like turning on the furnace, at the same time as the AC is running, or it could have a bad fan relay on it.

And when that happens when there’s no airflow your coil that’s on top of the furnace will freeze over in like a minute, and the longer you run it, the thicker that ice layer will be on that coil, and the longer it will take to thaw that thing back out. And of course, the fix for that is replacing the control board.

So what that’ll look like usually we’ll come to somebody’s house, turn on their AC, the compressor will start running, but the fan will not.

And eventually you’ll feel a lot of hot air coming out because that compressor is overheating, and it’ll probably trip or break.

And usually, if you take a screwdriver and try to spin that fan blade. You will notice that it’s really stuck in and does not spin freely.

You can try to take the motor out and oil it, but from what I’ve seen in the past oiling it does not really do much good and like a week or two, it will cease back up again.

So the fix for that is replacing the whole motor, and generally, when we replace the motor, we always replace the capacitor as well.

A lot of times it’ll smell like a burnt electrical smell, and if you take out the bottom door in your furnace reach in there and try to spend that blower wheel, usually, it’ll be all seized up or once in a while you’ll come to a house where the blower motor is humming. And if you give it a spin, it’ll turn on.

What that means is that the capacitor for that blower motor is dead.

You can replace that capacitor and get it to work. But a lot of times we end up coming back out in like two weeks, because the blower motor burnt out anyways.

So generally if a capacitor is fully dead for a blower motor, we just replaced the motor as well because it doesn’t have much life left in it.

In the market so many company providing air conditioner repair and maintenance services but one the best and most affordable company is as below you may visit their website to know further details and information.